Scribunto is the extension on Wikia that allows users to use the Lua language to dynamically add content to pages. It is to replace parser functions as the primary source for adding dynamic templates, although parser functions will still work for smaller templates.

Note: the words method and function are used interchangeably here.

All Lua code must be held in a page in the module namespace. These modules can them be invoked using

Multiple related functions can be invoked from the same module.

Note: Lua modules are one of the last things to be parsed on a page, after parser functions, magic words, template expansion, transformations such as signatures and the pipe trick, and the expanding of other extensions such as DPL. This means that, while you can use the results of these changes, you may not invoke them through a Lua module. Links do work though, both wikilinks and external links, when invoked using a module.

All modules must be held in the module namespace. Their basic structure is as follows:

The output of the module is whatever is held in p by the end of execution. It can be useful to only return strings to p to give the most predictable output, but it will take any data type and convert it into a string for you to add to a page.

You can use as many functions as you like in a module, and you can use both invokable functions and helper functions. Functions which can be invoked through the invoke template must be in the form:

The frame which is used as an argument here takes the arguments from the invocation. Helper methods on the other hand cannot be invoked directly, but can be used within other functions. Their syntax is as follows:

As in other programming languages, the variable names used in the function declaration (the first line above) are the words used to refer to those bits of information within the function.

Notice how there is no "p." before the function name of a helper method, but there is for the invokable method? That is what defines a method as one or the other. The helper method may take as many arguments as needed, or indeed none at all.

The helper method can be called using the following syntax:

Getting the Arguments from the Invocation[edit | edit source]

As mentioned previously, the main, callable methods within the module take in a single argument called "frame". This contains all the variables used in the invoke statement, arranged in what is known as a table. Unnamed arguments are assigned numbers starting from 1 (note that this is different from many programming languages which start at 0) while names arguments are named via their names.

where name is the name of the argument as used in the invocation.

If you want to put all arguments in a real table so you can access them later by name (good for when there are a large number of arguments or an unknown quantity of arguments), use the following:

If you want to get information out of a template, use the following:

You can also just invoke a template as an argument in your invocation, since templates are parsed before Lua.

Variables in Lua are declared by writing a word followed by an equals sign. Variables may be either local or global, but it is generally best to declare them as local (for reasons which have yet to be explained clearly). You do that as follows:

This means that the word variableName is now assigned the value "Something". Variable names may be any word containing only letters, numbers, and underscores, however they may not begin with a number. There are also certain words which cannot be used as variables as they are reserved for other things, such as 'local', 'end', 'if', 'for', etc. As a general rule, if it changes colour as you're typing it into the module editor, you can't use it as a variable name.

Variables can hold values of any data type. Assign the value nil to a variable to delete it.

Variables can then be accessed using their name. For example:

This will return the string "Hello World". More info on what those dots are down the page. 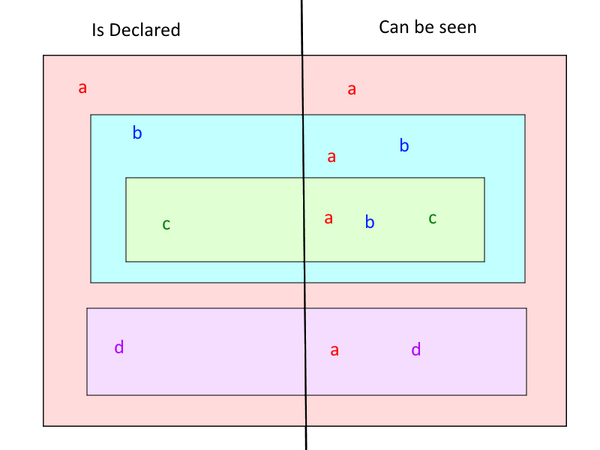 Lua uses strings, which are enclosed in either 'single' or "double" quotes. There are used for things such as words or sentences. It is the plain text which we can read.

Lua also uses numbers. These are all double precision floating point numbers, which for those who haven't programmed before means that they all use decimals. Integers however are always expressed exactly, despite being of data type float, but numbers with a decimal part, or numbers outside the range -9007199254740992 to 9007199254740992, always have the usual nasty habit of including rounding errors.

Booleans also exist in Lua, and are either true or false. Note the lack of quotes. If converted to a string, will be "true" and "false" respectively. False and nil are considered false by Lua, and all other values, including 0, are considered true. Note that "and" and "or" are used weirdly in Boolean expressions in Lua compared to their meaning in languages such as python or Java.

Nil is the data type for a missing data type. It evaluates to false if used in a Boolean expression and can be used to remove data from a variable, including from tables (more on that below)

You can add items to the table either at the time of declaration or later. For example:

These variables may then be called using the following syntax:

No comment as I have no idea how it's supposed to work.

Retrieved from "https://imamadmad.fandom.com/wiki/Scribunto?oldid=17109"
Community content is available under CC-BY-SA unless otherwise noted.